Until There Are None, Adopt One!

A point of light for pelicans; Forging ahead in Costa Rica

For the Love of Men

The HSUS is concerned that sled-dog racing is gaining popularity and support. The society is committed to protecting the interests of animals and improving the quality of their lives, and sled-dog racing is an unnecessary and dangerous activity for people as well as animals.

In March, David K. Wills, HSUS vice president for investigations, went to Alaska to observe the Iditarod sled-dog race. The HSUS views the Iditarod, in theory and in practice, with increasing concern. We believe that unless the organizers of such spectacles eliminate the elements of risk to the animals, the events should be prohibited in their entirety. The challenge is to determine how such reforms or prohibitions are to be achieved.

Until There Are None, Adopt One

This address was delivered by John A. Hoyt, president of the HSUS, at a Mid-Atlantic Regional Office/New England Regional Office conference held on April 26, 1991 at the Headquarters Plaza Hotel in Morristown, New Jersey.

Key decision on lab animals; Calling it organic; Last effort on AWA regulations; HSUS testifies on the Hill; Friends hold forums; A partial victory for the bison; Winning a battle with ADC; A new arena for dolphins 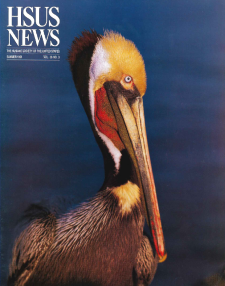