Meet The HSUS’s litigation team: They’re putting abusive industries on the stand, training the next generation of animal law attorneys, and raising the status of animals in the nation’s case law and among members of the bar.

The feline kingdom can leave cat admirers tongue-tied when it comes to describing the masterworks of colors and patterns. Our poster will help you distinguish between torbies and torties, calicos and classic tabbies, and more.

The Long Road to Freedom

Nicaragua is a small country with a rich diversity of wild animals, many of them under threat from habitat loss and illegal trade. Humane Society International is supporting the country’s only officially sanctioned rescue center as it rehabilitates trade victims and releases them back into the wild.

Believing that dogs should not be defined by their breed, Andrew “Roo” Yori saved Wallace from near euthanasia, training him to become a world champion competitive disc dog.

”A wash-over of calm, curiosity, and connection”: Whether you live in an inner-city high-rise or a suburban oasis, a nature journal can be a gateway to the sublime.

Chef Chloe Coscarelli’s sweet potato gnocchi will be a mouth-watering addition to your holiday spread.

In standing up for better treatment of animals, farmer Kevin Fulton is taking on factory farming proponents in his state—and representing compassionate Nebraskans.

Photos from our readers 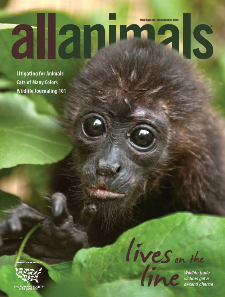